For the sixth consecutive year in a row, General Motors has been named the top manufacturer for customer loyalty in the IHS Markit Annual Automotive Loyalty Awards!

According to research by IHS Markit in the United States, General Motors has a 69% customer retention rate overall and an even more impressive 93% retention rate for their SUV and truck offerings.

Interestingly, General Motors has the highest manufacturer loyalty rather than brand loyalty. This means repeat customers are likely to buy a vehicle from any of GM’s four brands (Chevrolet, Buick, GMC, Cadillac) and do not necessarily stick with only one of GM’s brands. For example, a Chevrolet Equinox driver may end up purchasing a Cadillac XT5 in the future, based on their positive experience with Chevy.

How is this information calculated? It’s actually pretty simple: IHS Markit determines customer loyalty by looking at when a household purchases another new vehicle of the same make, model, or manufacturer. The new vehicle can either be a replacement for an existing vehicle or an entirely new addition to the household. For example, if a family owns a Chevrolet Blazer and then later purchases a Buick Envision, this would be an example of customer loyalty/retention.

IHS Markit determined this year’s awards by looking at 12.4 million new vehicle registrations in the U.S. during 2020. We’re proud to see General Motors top these rankings and believe it is a strong indicator of the great quality delivered by GM’s offerings! 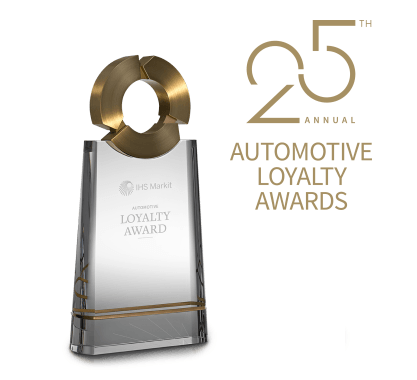